Prince Saunders and the Haytian Papers (1816) 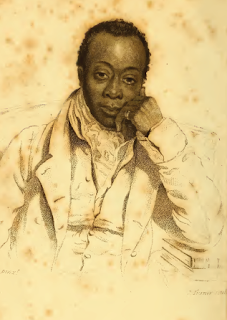 "Descendants of Africans, my brethren, the friends of humanity have asserted that we are susceptible of improvement like the Whites; our traducers affirm the contrary; it is for us to decide the question; it is by the wisdom of our conduct, our success in the arts and sciences, that we shall secure the triumph of our respected and illustrious patrons, and confound, forever, the malice and unfounded assertions of our implacable enemies" (223).

Perusing the Haytian Papers, translations of Haitian edicts and documents under King Henri Christophe by Prince Saunders, an African-American educator, one comes across in Saunder's introductory comments allusions to the remarks of white racists that none of the kingdom's writings were penned by blacks or men of color! To white supremacists and pro-slavery folks, the very idea of an independent black state with literate people of color writing their own laws was impossible! The Code Henri immediately also goes into detail the progressive, anti-oppressive laws regarding labor relations: "The proprietors and farmers of land are bound to treat their respective labourers with true paternal solicitude; an obligation which it is greatly for their own interest to fulfil in its utmost extent." Code Henri includes requirements for hospitals on plantations, medical service, and the right of government officials to mediate conflicts between workers and landholders. Chapter II's Art. XVII. also empowers the state to force one into labor: "The law punishes the lazy and vagabond, among whom are comprehended labourers of both sexes who shall quit the habitations in which they have domiciled, in order to reside in towns or other places where they are forbidden to settle: penalty, Art. 114. Titre 8." Although perhaps a little too confining in the movement of ex-slaves, and setting them to a work schedule from daylight to sundown may have been too reminiscent of slavery, clearly the laws (at least written laws, how they were enforced would be an even more interesting question) were far more progressive and interested in the welfare of the majority of the population.

Other documents contained therein include correspondence between Christophe and Leclerc, the former stating he cannot recognize the authority of a person he does not know and lacks recognition from governor Toussaint Louverture (8). Another, Narrative Of the Accession Of Their Royal Majesties To The Throne Of Hayti," endeavors to explain how Christophe rose to position of king. It includes a scathing comment on the French as "Vandals who have ravaged every country into which their well-known footsteps have strayed" (55). As one would expect, such a document is full or propaganda and hyperbole, which comes out strongly its it description of the Haitian navy as the "terror of tyrants" or whitewashes the dark collaborations of Christophe with others against Dessalines. The document also alludes to Citadel Henry and Sans Souci as a beautiful town built to great expense. The writer apparently thinks highly of Abbe Gregoire, too, particularly for his Literature of the Negroes and openly avenging the blacks for their wrongful suffering because of the racist beliefs of France (84). The short-lived return of Rigaud and internal dissension against Petion naturally occupies a lot of pages, as well as the latter's willingness to entertain compensation for France come into the propaganda.

Additional documents provide another look at how the kingdom of Christophe was conceived, with a royal family, Grand Council, Privy Council, Great Officers, the four ministers, etc. The document also endeavor to justify a monarchy with allusions to the "paternal monarchial government" associated with Montesquieu, while simultaneously recognizing the federative system of government of the United States as another model. Praise for Haiti and the land and people as sufficient for a kingdom also comes out through great lines such as this, "We say nothing as to the same martial valour and heroic character of the Haytian people: its glory is known throughout the world!" The "Manifesto" of Christophe also has some things to say about Toussaint Louverture:


Always intent upon the work of restoration, the Governor, Toussaint Louverture under his paternal administration, had reinstated, in full force, law, morals, religion, education, and industry; agriculture and commerce were flourishing. He favoured the white colonists, particularly the planters. Indeed, his attentions and partialities had been carried to such a length, that he was loudly blamed for entertaining more affection for them than for those of his own colour. Nor was this reproach without foundation; for, a few months before the arrival of the French, he immolated his own nephew, General Moyse, who had disregarded the orders he had given for the protection of the colonists. That act of the governor, added to the great confidence he had placed in the French authorities, was the principal cause of the feeble resistance the French encountered in Hayti (158).

Christophe's state also declared, "We solemnly declare, that we will never become a party to any treaty, to any condition, that may compromise the honour, the liberty, or the independence of the Haytian people; that, true to our oath, we will sooner bury ourselves beneath the ruins of our native country, than suffer an infraction of our political rights" (182).

Finally, the "Reflections of the Editor" has some rather strong words for Petion, who is accused of negotiating Haitian independence for a colonial relationship with France (certainly not true), while later documents allude to the ancient Egyptian, Ethiopian and other black ancestors of Africa whitewashed by racist detractors of the blacks and proponents of slavery (219). The documents end on a rather high note, calling for education in the arts and sciences to improve Haiti and in the process prove again the equality of the black race to the whites. Unfortunately, though such government records are revealing of the atmosphere of Christophe's court at the time (in particular, their interests, priorities, and propaganda), they reveal too little about the lives of the subaltern masses in Christophe's kingdom, though evidence from Dubois and other secondary sources indicates the spread of education, among thousands of Haitian children in Christophe's kingdom. Prince Saunders, clearly compiling these documents to show the British and other readers the progress Haiti made under Christophe, was a firm believer in Haiti as the paradise for blacks in the hemisphere, choosing to live in Haiti even after the fall of Christophe and Boyer closed all the schools, according to this. That he was an educator and helped to establish Christophe's schools, oversaw them and assisted in bringing British teachers and specialists (Saunders also introduced vaccination into Haiti, beginning with Christophe's children) adds credibility to his Haytian Papers, as well as revealing to depths to which he himself would later identify as Haitian instead of choosing a life of 'freedom' in the antebellum US. Indeed, Fanning's research reveals the extent to which many free blacks of the US looked to Haiti as a model and potential home, so Prince Saunders was not alone in settling in Haiti or serving to spread education and uplift the people.
Posted by Yvie at 7:28 AM